Search
Menu
Categories
‹ prev next ›
0
What is a Sous Vide Machine and why Should You Try One?
August 15, 2020 Ken Weiss Small Kitchen Appliances

A Sous vide machine (pronounced soo-veed), is the perfect fool proof cooking method for anyone who doesn’t like to cook.  This French cooking method, which translates to “under pressure” gets its name due to process of cooking the food in a vacuum sealed bag.

The sous vide cooking method elevates the heat in the bag, and circulates the heated water around the food for perfect cooking that every home cook should try.

This French cooking method helps retain juices, flavor, aroma and nutrients during the cooking process.  You then placed the food is the temperature-controlled water bath.  The sous vide oven creates heat and pressure which cooks the food to perfection.

With this easy-to-master French cooking method,  you can now create a restaurant quality meal in your home kitchen every time.

You can now get a sous vide machine for anywhere from low as $99 to as much as $500.  With new advances in the sous vide cooking technology, you can now use a small hand-held sous vide cooker in your own pots.   This technology is affordable for most budgets.

What is Sous Vide Cooking?

Sous vide cooking, which translates to “under pressure,” is a French cooking method made prominent in 1974 by French chef, Georges Pralus.  Cooking with the Sous vide method actually dates back to 1799.  It involves placing the food in a vacuum sealed bag to remove all the excess air.  Then, you cook the food in a precisely temperature-controlled water bath for several hours at low temperature.

With a sous vide machine, the water never comes into contact with the food.  This preserves the nutrients, vitamins and flavor as the food is cooked.  By sealing food in the vacuum bag, pressure builds up in the bag as the water in the sous vide machine heats up slowly to a precise temperature.  The water is circulated around the food, which cooks the food.

This helps to maintain the food in its own juices.  This is important to maintain flavor, texture and to preserve the vitamins and nutrients.  Nutrients are often cooked out in traditional cooking methods.  With a regular oven or even a slow cooker, food can be over cooked.  The benefit of using a sous vide machine, the food can’t be ocere-cooked, even if the food is in the oven for more than 24 hours.

Originally, sous vide ovens were made for commercial kitchens.   They were often too expensive for home cooks.  A couple on vacation ordered room service, and the hotel kitchen delivered what they thought was the perfect pork chop; tender and not over cooked or under cooked, which is common with white meat.

After a few years and several prototypes later, the Sous Vide Supreme Water Oven was created.

You can learn more about the Sous Vide Supreme Here.

It’s All in the Heat 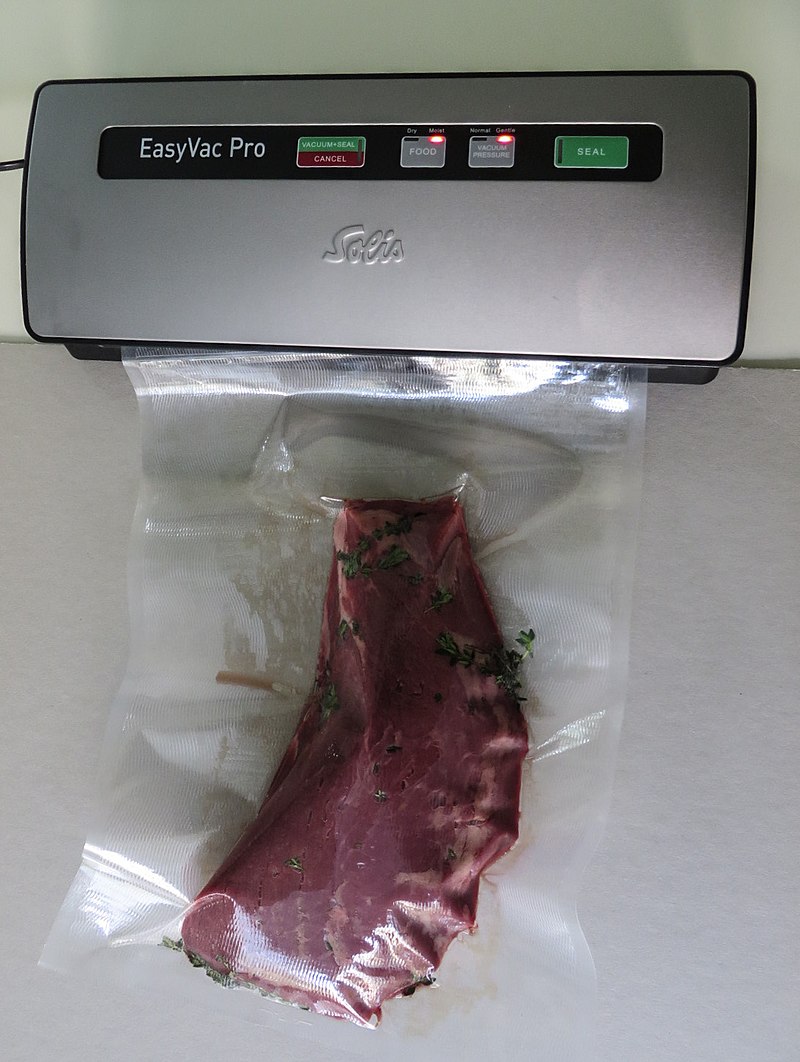 The benefit of a sous vide machine as compared to cooking in a slow cooker, comes down to precise temperature control.

A slow cooker, also called a crock pot, cooks food between 175 and 212 degrees Fahrenheit.  This depends whether you use the low, high or keep warm setting.  There is still the potential you can overcook the food in a slow cooker if you cook it too long. This mistake can ruin your meal.

With sous vide cooking food is cooked at a much lower temperature than a slow cooker, usually around 140 – 150 degrees degrees Fahrenheit, but cooks for longer time.

A sous vide machine works on precise temperature control that actually regulates the temperature of the water to maintain the accuracy within 1-2 degrees F.

How Does a Sous Vide Machine Work?

Sous vide cooking is a simple French cooking method, which anyone can master regardless of your cooking skills.  You season the food, seal it in a vacuum bag and cook in a water bath.  That’s it.

The only non sous vide step when cooking meat, is to put a light sear on the meat after it is removed from the water.

The Anova Sous Vide Cooker sells for about $100.  This sous vide machine turns your own pots into a sous vide oven.  There is no need to spend hundreds of dollars on a bulky sous vide water bath.

READ  What is the Best Masticating Juicer You Can Buy?

, is an easy-to-use sous vide machine that is designed to help you master sous vide cooking, and create delicious  restaurant-quality dishes at home.