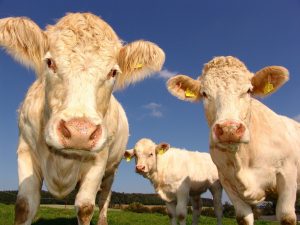 The next time you go to the grocery store and you head to the meat section, you may be asking yourself, why should I buy grass fed beef instead of grain fed beef.

There are significant health benefits associated with eating beef that came from cattle that consumed a healthy natural grass based diet, rather than a diet based on grains, particularly corn, which is not a natural bovine food source.

We researched and consolidated information from many informative sites to bring you this article.

Grass fed products are rich in all the essential fats that are proven by medical research to be health-enhancing, and are low in the dangerous fats that have been linked with disease.

Important fats found in grass-fed beef, such as Omega-3 Fatty Acids, may play an important role in the prevention and treatment of health conditions such as:

Research on the benefits of grass fed beef, reported by the Nutrition Journal, suggests there are significant health benefits to eating grass fed beef as compared to grain fed meat products.

The study found that meat from animals raised entirely on a grass-based diet had about twice the levels of conjugated linoleic acid (CLA), which may help fight cancer and lower the risk of Type 2 diabetes and other health problems.

The Fear of Tainted Grain

When cows were first raised for meat production, they grazed on grass in a pasture, not confined to feed bins on a corporate ranch with hundreds or thousands of other heads of cattle where they can potentially ingest tainted grain.

Scientists discovered that cows that were fed a grain-based diet reached the size sufficient for slaughter in as few as 24 – 36 months, rather than 5 years as is the norm for grass fed cows.

In the last several years, ranchers have had to destroy many head of cattle, due to disease that spread through the herd from eating tainted grain feed, such as bovine spongiform encephalopathy (BSE), more commonly known as mad cow disease.

Cows that eat a grass-based diet, while not immune some some types of bovine illnesses, are generally immune from disease spread from tainted grain or having cows corralled in a small space, like a corporate ranch, where cattle have little room to move around or get sufficient exercise. 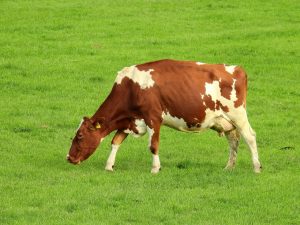 Cows raised on pastures offer several environmental benefits of grass fed beef, since they use far less fossil fuels than cows raised on a grain-based diet. Cows fed with feedlot, usually corn, are fertilized with fossil fuels, and are often sprayed with dangerous pesticides, and these chemicals make their way through the food chain from the cows, to the meat and ultimately into our bodies when we consume grain fed beef.

Grass-fed cattle are known to produce more methane than grain-fed cattle, which some people claim harms the environment, but the pastures and paddocks that house the cows create a phenomenon called “carbon sequestration,” which offsets the amount of methane released by cows in the fields.

are fed corn and grains which are fertilized with precious fossil fuels, and are often sprayed with pesticides. Rain runoff from the manure of feedlot cows can spread pesticides and antibiotics to other farms, crops, and public water sources.

We hear a lot today about the health benefits of consuming foods high in antioxidants.  While grain fed beef does contain some antioxidants, grass fed beef contains up to 4 times more vital cancer-fighting antioxidants, such as Vitamin E, Vitamin A, beta-carotene, glutathione, superoxide dismutase (SOD), and catalase.

These vital nutrients are significantly higher in grass fed beef, due to the naturally high levels of antioxidant properties in the grasses the cows consume, and healthy exercise that are devoid in grain fed cows that are corralled in small spaces with limited access to exercise.

To ensure you are eat foods high in antioxidants to prevent illness and disease, you should consider eliminating grain fed beef from your diet and replace it with grass fed beef.

Most people who eat grass fed beef say it cooks faster, tastes better and the meat doesn’t shrink as much during cooking as grain fed beef.

The grass fed beef has a fresher taste and generally more tender than cows fed a grain based diet.

You can learn about healthy and affordable grass fed beef, chicken and pork at Plaid Cow.